Diabetics can have milk, but what is the best milk for diabetics? It may surprise you. Milk is an important part of everyday living. In some way or another, we incorporate milk into our daily diets. From yogurt to cheese to cream, we somehow find a way to interact with this “pearly silk”. I always loved milk. Let’s see how we can have milk when we have type 2 diabetes.

Why are Some Milks Good to Drink if you Have Diabetes?

If you live with diabetes, it may be a struggle to keep up with drinking milk. The constant need to carb-cut and regulate sugar levels make it a worry to sustain a level of milk intake. 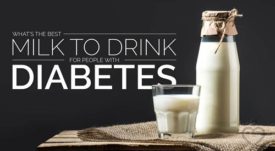 But do diabetics need to stay away from all forms of milk? Do they have to completely avoid ingesting milk? Or are there certain types of milk that diabetics can take as viable alternatives? Hey! That’s why we’re here; to find out. So without further ado, let’s begin.

These three forms are all linked by one thing. INSULIN. Essentially, insulin is a hormone that regulates blood sugar level. When the body does not produce enough or fails to respond properly to insulin, the body’s ability to process blood glucose (blood sugar) gets impaired and as a result, a spike in blood sugar levels is observed. They key to diabetes is to keep it under control.

Diabetes, unfortunately, has no cure (YET). Without careful monitoring and management, diabetes can lead to an accumulation of blood sugars in the blood which can increase the risk of very dangerous complications like stroke and heart disease. Consequently, people living with diabetes are thoroughly advised to avoid certain foods for their health; foods that could potentially facilitate the production of carbohydrates or glucose in the body.

This brings us to the topic of milk. We all know that diabetics should avoid sugary drinks and high carb diets, but what about milk? Milk is a staple in all diets and serves as an important source of proteins and vitamins that is essential for the body.

It’s common sense that milk does contain sugar (lactose) which could be a nightmare for diabetics, but does that mean that diabetics should completely stifle their supply of milk? Are there any other alternative options to satisfy this need? Let’s take a look:

Milk and Meal Plans for Diabetics

According to a 2015 statistic, about 400 million people all over the world suffer from at least one form of diabetes. This figure is expected to double in the next decade. As a result, the World Health Organization as well as the American Diabetes Association made efforts to recommend several meal plans geared towards controlling high blood sugar levels and sustaining a lifestyle capable of moderating the effect of diabetes (as well as preventing early onset of diabetes).

Besides the options of regular exercise, maintaining a healthy weight and regular checkups, some of the dietary plans include:

Now let’s consider milk. Milk contains fats, sugar (lactose), carbohydrates, proteins as well as cholesterol. The quantities of these components are tallied on the labels of the specific types of milk. Diabetics are advised to look for the least amount of sugar per serving and completely avoid milk with a high quantity (per 100g) of saturated and trans fat.

This ensures that the GI index of milk for a diabetic patient remains as low as possible in order to prevent that dreaded blood sugar level spike!

Check Out the Video to Learn About Milk for Diabetics

So, What Type of Milk is Best for Diabetics? 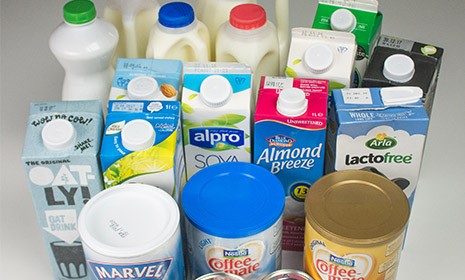 Various types of milk have very diverse nutritional content. It is important that diabetics understand the numerous varieties of milk that exist on the shelves of grocery stores and make decisions accordingly.

Whole Milk (Regular milk) contains: 8g of Total Fat (Saturated, Trans, Polyunsaturated and Monounsaturated. Poly and monounsaturated taken in moderation can, however, be good for the heart.), 150kcal of calories, 24mg of Cholesterol, 15-20g of Total Carbohydrates, 7.7g of protein and up to 15g of Sugar [per serving].

It only makes sense that diabetics choose alternatives that are much lower in terms of fat, carbohydrate and sugar quantities to ensure that blood sugar levels are controlled and optimized to prevent a spike.

Below are some of the many types of milk suitable for diabetics. Note that the unsweetened varieties of these milk types are recommended as the addition of sweeteners can increase the sugar and carbohydrate quantities and ultimately result in an undesirable blood sugar level spike.

So what is the best milk for diabetics? Well, that depends on what they prefer, what they’re trying to achieve in terms of their carbohydrate count and the rest of their overall diet on a daily basis. For instance, if a person needs to completely reduce their carbohydrate intake to an absolute minimum, then it is best to consider almond, flax, hemp or cashew milk as these contain almost no carbohydrates. 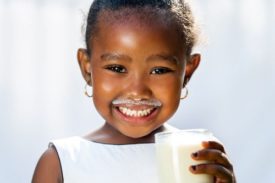 The same analogy goes for the other alternatives to whole milk. Milk types like rice or goat milk do contain carbohydrates, but not as much as whole milk.

It is important for diabetics to closely factor these quantities into their overall carbohydrate count. Skim milk, however, can be a lower calorie / lower-fat option for people who prefer cow’s (whole) milk.

What is the best milk for diabetics? I’ve now given you the answers. Diabetes is a disorder of selectivity. And with all disorders of selectivity, not everything can be beneficial to you. Dairy is no exception. Milk is a vital source of protein, calcium, and vitamin D and must be taken frequently to facilitate bone health and ensure optimal bodily functions.

On the flip side, milk also contains sugar and can result in an unwanted blood sugar level spike which is detrimental to diabetics. Fortunately, there are some types of milk which have a low glycemic index, contain less sugar and carbohydrates and hence fit the profile of diabetics.

Regardless of the choice of milk, however, blood sugar monitoring and moderation is vital. Food labels should always be observed to understand the nutritional information that a certain food class has.

With an ever increasing diabetic population, it is paramount that the world evolves to understand what can be done to eat healthily, what should be done to spread the word and what must be done to preserve the lives of millions for generations to come.

2 thoughts on “What is the Best Milk for Diabetics? – Milks that are Good to Drink”